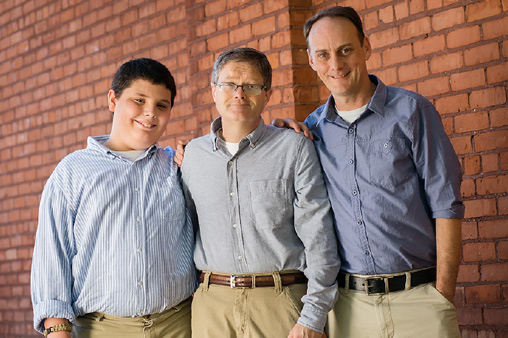 After years of waiting, Jesse is adopted by a loving family.

The wait was lifted for both Jesse and his family, the Carson-Ladds, after they first met at a match event and formed a relationship that would last a lifetime. Jesse’s persistent hope for a family, despite painful years of waiting, was fulfilled when the Carson-Ladds committed to provide a home to an older child who greatly needed their love and support.

Jesse had experienced a great deal of loss upon coming into foster care after his birth mother passed away. By the time he was he was 9, he had spent far too long in highly restrictive institutions, because there was nowhere else for him to go. Jesse was then listed with Children Awaiting Parents (CAP) and enrolled in the Wendy’s Wonderful Kids (WWK) program where he received individualized adoption preparation and family recruitment through a supportive relationship with his WWK Recruiter. Jesse is a very affectionate child, who longed for a family to love him. He would often write songs and poems for his workers and quickly attach to anyone who would pay him special attention. Finally, PJ and Rich Carson-Ladd were accepted as a match and introduced through a local matching event (where prospective families and waiting youth get to meet and interact) last year.

PJ says he and Rich had also been waiting and waiting for a child and were about to give up when they met Jesse and knew right away he was the one to complete their family. PJ and Rich chose to pursue older child adoption because they say foster youth, “have more baggage and need help carrying it; they need you more”.

Jesse and the Carson-Ladd family were nervous upon their first meeting, but PJ says that when Jesse walked into the bowling alley at the match event, they saw him and instantly said, “That’s our boy”. Jesse says, “They were helping me find bowling shoes and I was like, why are these guys even helping me, I don't know them. By the end, they were really nice guys and it turns out they were my dads!” Meeting Jesse re-energized the Carson-Ladds and gave them something to fight for. They persistently advocated to move the process along until he was placed in their home.

PJ says at first, Jesse was nervous and insecure, constantly worried that he would do something wrong and the Carson-Ladds would change their minds. Now, Jesse realizes he can make mistakes and he’s not going anywhere. “He has confidence, is self-assured and feels safe”, says PJ. About adoption, Jesse says “I love it; they're the best dads you could ever have”.

The Carson-Ladds said their lives completely changed when Jesse came into their lives in ways they never imagined. As first time parents, they thought they would have a certain parenting style, or always remain calm and know the right words to say, but PJ says it’s a journey and they are all constantly evolving and adapting to the new lifestyle. By the time their adoption legally finalized on May 9th, they felt they had been “finalized” since Jesse walked in the door. “Once you take over, become his advocate and you're the one person who knows more about him than anyone else- that’s when it’s finalized”, says PJ.

To people considering adoption, PJ says, “Never be afraid of the challenge; the rewards are so amazing and Jesse is so grateful for his family.” Jesse also has advice to other waiting children: “Stay healthy and stay good because you don't want to go through what I went through. I have a happy life now and I want you to be happy too.” And if other children have fears about adoption Jesse assures them, “Go ahead and be adopted because you don't want to waste your life; you'd rather have your parents and have a great time with the rest of your life.”

Jesse now writes poems for his forever family and gave his dads a special poem for their first Father’s Day together this past June. As the Carson-Ladds celebrate all the important milestones, holidays and enjoy life together as the permanent family, they discover it was worth the wait.