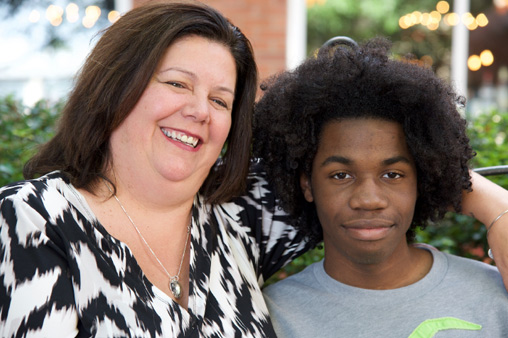 For Laurie Robinson, adopting her son Danny, when he was 10-years-old, forever changed the way she looked at the world.

“He’s the greatest 16 year old kid in the world! I’ve probably learned as much about myself as a person and the kind of person I want to be as much as I’ve taught him in the last 6 years”, says Laurie.

When Laurie decided to add to her family, she said she was determined to “stop waiting for the American Dream”. She wanted a family, even if it looked different than expected.

Laurie and Danny had anxiety about adoption. She understood how scary it must be to hear someone to say, ‘this stranger is gonna be your mom’.

Danny and Laurie call August 11th, 2009 “Gotcha Day” when Danny officially moved in and they became a forever family.

They have built a strong bond, but things aren’t always easy. When typical teaching or discipline methods fall short, Laurie says “a bucketful of patience” and being open to asking for assistance has helped. Laurie persistently explores all solutions to help Danny thrive. Parenting Danny has helped Laurie educate others to assist youth who have experienced challenges and need special support. “I try to be very conscious of not judging other peoples’ situation, behavior, or what I perceive because you just don’t know what is going on in someone else’s life”.

Laurie has given Danny what hundreds of thousands of foster children in the U.S. long for: unconditional commitment and a permanent place to call home. Because of Laurie’s determination and empathy, Danny will have a place to go for the holidays, he will have support to address the challenges of adulthood and he will always have a Mom in his corner.

Children Awaiting Parents (CAP) is very pleased to help Laurie locate a second child to add to her family. Laurie is familiar with the road blocks of the system that inadvertently prevent prospective parents from adopting waiting youth. CAP has helped her advocate to be considered for a second child and is here to cut through the red tape so that she can find the right match.

Laurie hopes to forever change the world for two youth by giving them a permanent, loving family. CAP is honored to assist the adoptive families who offer foster youth a way out of poverty, loneliness, homelessness, incarceration and dependence on the system that they may otherwise face upon leaving foster care.