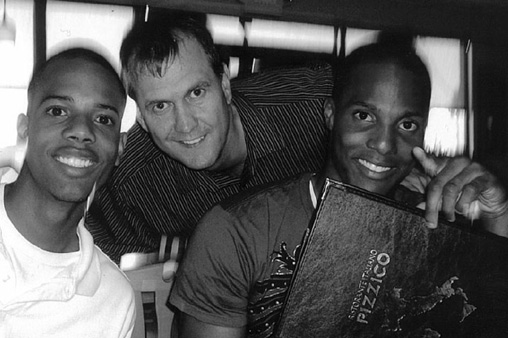 A Family to Celebrate

In the field of adoption there are no Emmys, Grammys or Nobel prizes. What generates Oscar-like buzz in our small office are phone calls like the one we received last fall from Michael Whitney. Michael called to inquire about children he had seen on our website. When we asked him more about where he was in the adoption process, he shared that he had, in fact, used our services before...15 years ago.

Michael and his wife at the time were in their early twenties and ready to start a family. In their effort to have children they spent approximately $250,000 on surrogates, private and international adoption, and still had no children in their home. Then they found CAP, and in turn, found two little boys that they wished to adopt. About 50 days later, the boys moved in.

Michael shares that there was resistance to the adoption at first. There were concerns expressed regarding race and geography. Michael lives in New Hampshire. Garon and Antwun, aged five and seven at the time, are biological brothers who were living in a foster home in Texas. Michael simply convinced all parties involved that he was the right person to parent these kids, and he was right. Garon and Antwun are now in their early twenties and both an obvious source of great pride to their father. Michael tells us that he had his challenges but wouldn’t take back a thing. “Adopting these boys exceeded all my expectations. The experience was incredible and I look forward to doing it again.”
Garon is now a marketing major at Riviere College and an avid basketball player. He talks about his memory of coming from urban Texas to rural New Hampshire (he and his brother had never seen snow!) and about what a big change it was. It is heartwarming to hear him talk about his father and how he was always there to take care of him. They bonded over basketball, a sport Michael introduced them to, and Garon shares that it was sports that helped him through challenging times.
When asked what advice Garon might give to those considering adoption, he offered that “it’s important for families to know that kids have been through tough times and that bonding is the most important things. Kids might want to isolate themselves but you need to show them what real love is.”
Twenty-two-year-old Antwun recently won his first modeling competition during Charleston Fashion Week, and is pursuing a career in acting and modeling. He also plays the saxophone. Antwun echoes his brother’s sentiments about how his father was always there to encourage him to pursue his interests; they were supported in whatever they showed interest in, from sports to the arts – they just needed to finish what they started.
Antwun looks back fondly on his life-changing move to New Hampshire, on meeting his new family and seeing his new house. “It’s when I saw what a new life would look like.” Antwun savored his first home-cooked meals and formed a tight bond with his first pet “Joe”, the family’s dog who played an instrumental part in helping Antwun transition into his new home. His advice to those considering adoption is simple, “love your kids and treat them as your own.” He is happy and thanks God that his father did just that. To Michael, family is first. He wishes more people considering adoption would look at the 120,000 children waiting in foster care as an option. “You don’t need a lot of money - you need love and patience.”
The love that the Whitney family has for each other is inspiring. We at Children Awaiting Parents cannot thank Michael and his sons enough for sharing their story with us. We cherish the opportunity to celebrate families like theirs and wish them every happiness in the next chapter of their lives together.