For the past few years a group of adoptive parents, adoption professionals and adoption advocates have been gathering semi-annually to remember, tape record and video what happened during the adoption revolution of the 60’s,70’s,80’s & 90’s and the role they played in it. Many were touched by adoption both professionally and personally as adoptive parents. The purpose was to not only record the history, but to explore ways in which they could share what has been learned and experienced and to continue their child advocacy, acting as mentors to eliminate the barriers for children being placed for adoption.

The Adoption Mentors are many of the architects, movers and shakers who brought about the adoption revolution.

Yet, as they remember the past, this group realized there is still much to be done. Sometimes it seems that little has changed: children are still waiting and need families, and families still need lots of support. So many of the issues are the same: agencies refusing to move children across state lines (even though refusing is illegal), countries unwilling to allow their children without permanent parental care to leave internationally, families coping with children with severe disabilities such as fetal alcohol syndrome and reactive attachment disorder, courts unwilling to free children for adoption, state laws prohibiting access to birth records for adult adoptees, and workers prejudiced against gay adoption. (Florida has finally changed its law to permit gay adoption.)

At their last meeting the group decided that by volunteering their services as mentors to those working and parenting in the field today they could share what they have learned. Staff from Children Awaiting Parent (CAP) were excited about the possibilities and came to interview them and hear their experiences and stories. They immediately offered to host the Adoption Mentors on their website and to encourage families and professionals experiencing problems to contact them. Although many are retired, the Adoption Mentors continue to be very active in the adoption world and are learning more every day through parenting their large extended families. 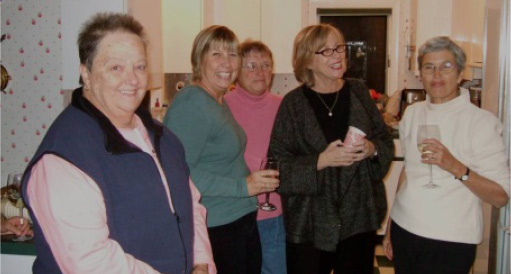 Get in Touch with the Mentors

If you would like to get in touch with those listed, please contact Peggy Soule at peggysoule@roadrunner.com or 315.536.9710, and she will connect you to those with the most experience dealing with your current issue.

Filis M. Casey founded the Alliance For Children adoption agency in 1974. Filis was the Executive Director of Alliance For Children, until her retirement in 2008. Presently, Filis is the Director of the Alliance For Children Foundation, a non-profit international relief organization devoted to alleviating the suffering of vulnerable children living in orphanages throughout the world. In 2006, Filis and her daughter Marisa (adopted from Colombia at age 3) published Born In Our Hearts a heartwarming compilation of adoption stories written by families touched by adoption. Filis would be happy to assist families in finding resources for children with adoption related issues.

Dawn C. Degenhardt: Adoptive parent of nine, seven considered special needs (all races or mixtures) - now all in their 40's and have produced 17 grandchildren. Co-Founder of COAC of Cleveland, Spaulding of Beechbrook, COAC of Maine, MAPS (Maine Adoption Placement Services). Under her direction MAPS grew to one of the largest agencies in the country with three offices in Maine, four other states and programs in 15 countries. She retired in 2005. She currently is founder and director of Aid for Kids - a program for supporting children and families in need in several states and countries.

Joyce Forsythe is the former director of Family Development Services, a psychotherapy practice specializing in post placement services to adoptive families. She is currently coaching cancer patients who chose to use Max Gerson, MD’s nutritional program to heal their disease. She is willing to talk to families or adoption professionals about their concerns.

Anna Johnson has worked in adoption, both domestically and internationally, for 30 years. Formerly the director of programs for a large international agency, she has developed expertise in program development and maintenance as well as supervising staff working in this area. She is a South Carolina licensed clinical social worker in clinical practice and currently has a private adoption practice preparing families for adoption and working with birthmothers who are making an adoption plan. She is happy to talk with other adoption professionals about the above issues and has a special interest in transracial/transcultural adoption, gay and lesbian adoption, and group work with adoptive or pre-adoptive parents.

Maryjane Link retired as the Executive Director of Children Awaiting Parents, publisher of The CAP Book, a national photo listing and recruitment organization. Previously an Adoption Specialist for the New York State Office of Children and Family Services, Maryjane has worked as a child advocate for over 30 years. She is pleased to respond to questions about the adoption of children in foster care.

Peggy Soule is an adoptive parent, child advocate and former Executive Director of Children Awaiting Parents (CAP). She is willing to talk with adoptive families about anything as her experiences raising six children have taught her much. She is willing to consult with anyone who is having problems convincing workers to place children across state lines, doing publicity on waiting children or having any other problems which prevent children from finding permanent homes.

Andrea Stawitcke, MPA, has been the executive director of Bay Area Adoption Services (www.baas.org) in California for 20 years. Bay Area Adoption Services, or BAAS, as it is known, is an international adoption agency that has been placing children since 1984. She has overseen the growth of the agency from a small, local service agency to one of the largest in the bay area. BAAS' most active program is placing waiting children from China. Her passion is in post adoption services but is happy to talk with other adoption professionals or prospective adoptive parents who are considering building their families through an international adoption. She has two daughters by birth and is Godmother to three young adults adopted from Guatemala.