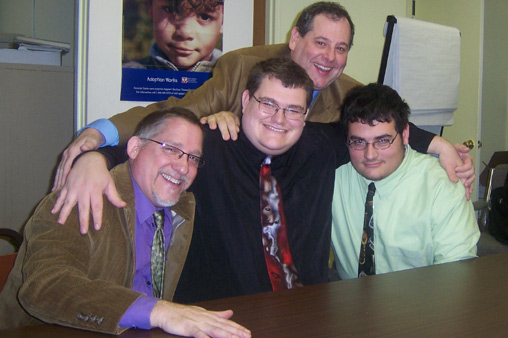 John was first listed with CAP in 2007 when he was almost 17 years old.

He was assigned to work with CAP’s Wendy’s Wonderful Kids Recruiter, Melanie Schmidt, because he was considered one of the “hardest to place” waiting children. John had been bouncing around to different foster and group homes since he was 7 years old, but he was adamant that he strongly desired to be loved and adopted by a forever family. John’s hopefulness that he would find a family touched Melanie deeply and she worked tirelessly to make this a reality for him.  When John started to get discouraged, Melanie told him to hang on a bit longer, his family was out there. In 2008, John was featured in WHAM 13’s weekly video feature of a child waiting to be adopted called “Friday’s Child”. Melanie sent this video to everyone she could think of until an adoption staff member at Family Focus viewed the video and an instant connection was made. Rich Buley-Neumar is the Administrative Liaison and Family Transition Worker at Family Focus and he and his partner Ken had already adopted their son Gary as an older child from foster care. Rich watched John’s video and instantly felt that something “clicked”. John and their son Gary were strikingly similar- both are friendly, outgoing guys who like wrestling, video games, sci-fi movies and rock music. They even shared similar birth days, a year apart. John seemed to be a great fit for their family.

The matching process with John and his forever family was not always easy. Rich and Ken stayed committed through a lengthy visitation process and many up and downs. Some people in John’s life felt he would never be able to live in an adoptive family setting since he had spent so much time in residential treatment and foster care. CAP staff partnered with Rich, Ken and John and helped them advocate about the importance of an adoptive family as a life-long support system. John visited regularly with his “maybe” family on Long Island for close to a year before he finally moved in in March of 2010.

In January of 2011, Melanie was invited to attend the Family Focus covenant ceremony for John and his new family and the adoption was finalized on April 22nd, 2011 when John was 20 years old.

What is unique about parenting teens?

The biggest challenge is twofold.  The first half of it is learning to always keep in mind the disparity between the child's physical age and their psychological/social age.  My husband and I adopted a 17-year-old and a 20-year-old, and we sometimes chant things to ourselves, such as "eight years old, eight years old..." or "respond, don't react..." to remind ourselves that while their bodies are mature, their behaviors revert back to the point where they did not get parented through certain stages.  The second half of this is to navigate this murky water when in public, where people don't understand why a grown man might be throwing what amounts to a temper tantrum.  It takes a lot of self-assuredness not to become embarrassed, and to find a way to communicate to the public that you are handling special circumstances, without humiliating your child by calling strangers' attention to their challenges.

What works for disciplining teens?

The first and most important thing is to find out what is important to them.  Cause/effect and consequences don't have much impact when you care more about the results than they do.  Therefore, yelling in anger because they don't clean their room means nothing if they don't care what their room looks like, or if they know that it bothers you more than it does them.  You can't win a battle when they have nothing at stake.  So it takes finesse and astute observation to figure out where you have leverage.  Don't parent by trying to impose all of the things that are important to YOU.  There is a danger of feeling insulted when you think their expectations for themselves should be the same as your expectations for yourself, and they just don't seem to care.  But remember, "Do you think I would go to the mall dressed like that?" doesn't work when they are thinking that THEY would never go dressed the way YOU are! And above all, don't discipline out of anger, frustration, resentment or retribution, only out of goal-driven positive encouragement.

How do you build a relationship with a teen when they come to you so much later?

The answer to this one is deceivingly easy - PARENT THEM.  Accept them as they are, with all that they came with, honor their past, do not try to MOLD them into who they should be, but give them the support, guidance, praise, trust, patience, room to grow and room to make mistakes that any child should get from their parents.  Show up for them, and your relationship will solidify as you go.

Preparing teens for after care -- what do they need to know to live in the adult world...helping them get into college, find jobs, etc.?

DON'T PUSH!  Both of my sons were still in school, where the pressure of planning for the future never let up.  Schools don't understand that the children can't plan for the future when they are still working on NOW.  They both had explosions (and hospitalizations) when school ended, because there was a huge vacuum left by the letup of the pressure, and the realization that it was up to THEM to fill it!  Encouraging them gently is never wrong, but let them have time not only to settle into life with a forever family, but to explore and discover who they really are on the inside.  First they have to get to the point where they are finally out of self-preservation mode, where the self they show to the world is painted on the protective walls they have surrounded themselves with.  Plan on them staying with you for a long while as they figure this stuff out.  It will become evident when they become anxious to try something new, like college or a career.

Anything else you think is worth sharing with other adoptive parents?

The most valuable characteristics in myself that I have discovered or developed are patience, creativity, calmness, and the ability to not take things too seriously.