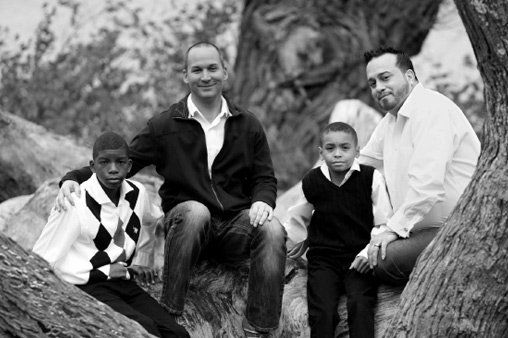 Matt and Jaime began their adoption journey as empty nesters that were not ready to be done parenting. They spent time volunteering with foster children in the community and decided to take their commitment a step further by adopting an older child in need of family.

James officially became a part of their family in 2010 when he was 10-years-old. When they first met him at age 8, he had been in foster care for 4 years and was living in a group home. They were warned about behaviors and told they would have their work cut out for them, but James has thrived in his adoptive home. “The love of a devoted family and coming home was all the push he needed. He amazes everyone around him; people cannot believe he is the same kid. Our family is so blessed to have him and watch him flourish into this amazing kid.” About adoption, James adds, “I think it’s awesome! I was tired of moving all the time now I have one home.”

Matt and Jaime say Children Awaiting Parents went above and beyond to support them through the adoption process. “The biggest support, help and the best wealth of information we had was Children Awaiting Parents; they were amazing. This was also before I started volunteering with … so I was just the average person off the street and they went above and beyond for the kids they service,” says Matt.

It wasn’t until after Matt and Jaime adopted James that they realized his younger brother Steven was also in need of a home. They got to know Steven through his visits with James. Bringing him into the family happened very naturally. Steven moved in to the home in March of 2012 at age 10 and finalized July 8th, 2013. The boys are best friends and will often wait at the window for the other to come home from school.

“We didn’t think it could get any better. We loved James so much and it was all working out so good. Then Steven came along and he really rounds out the family so well. Their resilience to overcome their past and open their hearts to family again is amazing,” says Matt.

They say, “There are many kids who don’t have homes, we are just lucky we don’t have a big farm house or we would be in trouble.” Farm house or not, Matt and Jaime continue to commit their time and energy to helping more children find forever homes. As a committed member of CAP’s board, Matt spends any extra time he has getting the word out about the need for families. He and Jaime also generously provide a sense of family to other children by mentoring CAP’s waiting youth and temporarily providing shelter for those who needed it.

The Burgos-Reynell family is putting their belief in permanence into action to forever change the lives children who have waited the longest for the love of family. Matt explains, “We would like to see a bigger presence in the community about older child adoption. We do not believe there is enough information out there and we could do so much better in helping get the word out!”

We hope you will join them in helping CAP find more families for our waiting youth.