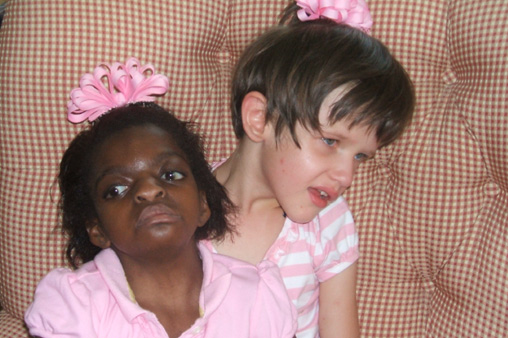 What Love Can Do

Lorry and Lee Dinsel started their adoption adventure through the Pennsylvania state system when they fell in love with and adopted two beautiful daughters with special needs. But they were not done there, their youngest daughter Klarissa longed for a younger sister. Lorry started her search again. She came upon the Children Awaiting Parents (CAP) website and found then four-year-old Andrea. “She tugged at my heart, I kept coming back to that little face,” said Dinsel.

Once the Dinsel’s started the process they found out that Andrea was in Florida and had many special medical needs. She spoke with Andrea’s foster mother regarding all of her medical conditions and hit the books and started researching. After researching Andrea’s conditions, such as Wolf-Hirschhorn Syndrome and Sickle Cell Disease, she was not frightened about what she found. Her older daughters have special needs as well and she felt prepared to be Andrea’s mother.

Within three months, the Dinsel’s had finalized Andrea’s pre-adoption by phone to Florida. Lorry and her two daughters packed their car and left Pennsylvania for a “girl’s road trip” to pick up Andrea. They took three days on the return trip to Pennsylvania to make the transition from the warm Florida heat to the northeast cold easier on Andrea. “We learned a lot about each other on that trip,” said Dinsel.

Andrea, “Pookey”, has adapted well into her new family. Lee, also an adoptee, was instantly smitten with Andrea. He scooped her up and has never let go. Andrea is his hero and he hers. She is now seven years old and has gone beyond what every doctor told them she would do. She has succeeded in walking, crawling, and maturing developmentally. Her progress has astounded her family as well as her doctors, her aide, therapists and teacher. Andrea’s Sickle Cell physician Dr. Krishnamurti stated that “This is not the same child that first came to my office.” “My proudest moments are seeing my girls succeed,” says Lorry Dinsel.

Dinsel stated that her relationship with CAP helped significantly with the process. She feels like she has built a relationship and partnership with CAP. “The staff follow-up with me in e-mail and by phone calls, I feel like I know the whole staff by name,” states Dinsel.

As an adoptive parent to special needs children, Lorry’s advice to parents would be to read through the kid’s case and medical files and don’t be intimidated by what they find. Dinsel stresses, “You need to be the advocate for your child….their hero.” She has also learned that by giving your children a loving, child-focused home, time to bond and quality time, kids can achieve anything.