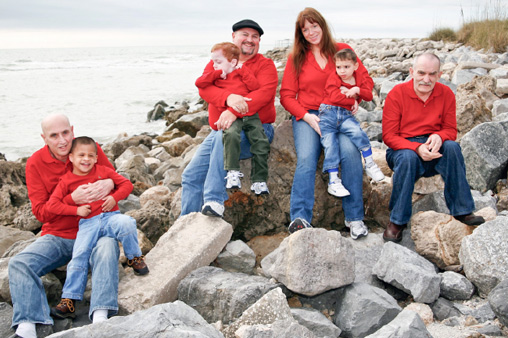 Jeanne & Ron Hux never planned to have children. Jeanne is a licensed Social Worker specializing in the mental health field. Her passion is working with the special needs elderly; this is where she met Malcolm who changed their lives forever...

Malcolm, 60 years old, spent 30 years in an institution. When his last foster care placement fell through, the Huxes knew that they wanted Malcolm to join their family. "Malcolm is our world, he is everything to our family," said Jeanne. After being adopted (full conservatorship), Malcolm said he wanted a roommate. Jeanne and Ron were surprised that he wanted a roommate because he had their full and undivided attention. The Huxes were searching for a companion for Malcolm when they received a phone call from the State of Tennessee. They had a match for them - a 47-year-old man named Bryan. When they brought Malcolm to meet Bryan, the Huxes knew the two men were a perfect fit. They told the caseworker immediately that Bryan would be a part of their family. Both men have severe medical and mental disabilities which have brought many challenges to the Huxes but that has not stopped this family.

A few years later the Huxes were in church and Bryan said to Jeanne "da-da" (which means baby to him). Jeanne and Ron later realized that the men were plotting to have their parents adopt a baby. "We never thought we would have a baby, but if we were going to adopt a baby he/she HAD to be a child with special needs," said Jeanne. The Huxes started their training course for adopting through foster care with Malcolm and Bryan involved in the process. Jeanne and Ron thought that the two of them would change their minds once a baby came into the picture. They didn’t. When the training and certification was completed they were introduced to a family of four severely medically and mentally fragile children. "Malcolm loved them. He became the supervisor over them and Bryan was helpful. Having kids around the house helped their behaviors," said Jeanne.

After having fostered these children, Jeanne wanted to adopt a baby with special needs. One of Jeanne’s employees sent her a picture of Anthony, a five-year-old boy she found listed on the Children Awaiting Parents website. The minute she saw him, she knew she was going to adopt him. She showed the picture to Malcolm and Bryan and they were on board immediately. Ron was a little fearful because of all of Anthony’s medical needs. Within a month, the caseworker was in contact with them to say they were a match and set up a visit to meet Anthony. "Team Hux," as Jeanne calls her family, got into their 12-passenger van and took a road trip to from Tennessee to Florida to visit with Anthony in his foster home. Anthony, who is blind, had no response to Jeanne at their first meeting but responded to Ron immediately with a smile. Within 15 minutes, the family had decided to adopt Anthony.

Anthony is now seven years old and thriving with his new family. The doctors told the Huxes that Anthony’s life expectancy was going to be very short. With the love and support from Jeanne and Ron, Anthony exceeded all expectations. He has started moving on his belly and has been fitted with braces for his legs. Although he is blind, he can now see figures.

The Huxes have endured many challenges through their adoption process but Jeanne said "one of the biggest challenges has been the fear of the medical needs and the unknown." She realized that every family has it challenges; theirs are just different than those of kids without special needs. Jeanne says her proudest moments come from seeing her family smile. "We laugh every day," says Jeanne.